How can I support my child with phonics?

There are so many easy things you can do to help support your child’s phonics learning. Here are a few ideas from phonics expert, Laura Sharp.

As a parent, you are the model of good speaking and listening. Regularly introduce new words (vocabulary). For example, for the word big you could also introduce large, huge, or enormous. Encourage them to say the word too. This is not about reading the words but about your child hearing and saying them.

2. Read to and with your child

This models good reading skills and promotes reading enjoyment. Have a special book box or bag where your child can keep the stories and any other texts, such as comics or non-fiction books, you’ve read together recently. Re-read these so that over time your child builds up their stock of stories and texts they know well.

Ebooks are another lovely way to share a story or non-fiction book together. Just make sure eBook reading is balanced with reading hard copy books so your child experiences all the different skills required for reading from a page and reading from a screen. Oxford Owl has a free eBook library where you can read together online.

Teach nursery rhymes and songs and make lots of opportunities to sing and recite them.

To find out how to pronounce the pure phonics sounds, watch our video:

Video: How to say the sounds

Learn how to pronounce all 44 phonics sounds, or phonemes, used in the English language with these helpful examples from Suzy Ditchburn and her daughter.

These kinds of games are fun to do and will support your child in hearing speech sounds that are the same and that are different. For example:

Into the pot: Model the phrase ‘into the pot goes’ while placing objects that rhyme into a pot/bowl (for example, a bat, a hat, a cat, a mat). Ask your child to repeat with you. Do this lots of times and then see if they can do it independently. You can then vary this; choose objects so that they have to decide which will not go in the pot e.g. a cat, a rat, a hat, a bird.

lay simple phonics word games based on the sounds your child is learning and has learned at school. If you are unsure what sounds your child has been learning in school then do ask the teacher. They will be happy to share this with you. Schools often inform parents about the phonics programme they use and the order in which they teach the sounds.

Start off using just the speech sounds and then immediately say the word. For example, At the shop I will buy a… /m/ /a/ /p/ – map, a /b/ /e/ /d/ – bed, a /d/ /u/ /ck/ – duck. Encourage your child to join in with you after you have this modelled for them. Then say the sounds and ask your child to say the whole word.

Prepare a box/tray with small objects or pictures from around the house (for example, a peg, a bag, a cup, a pen). Say the words, ‘Wizard, Wizard can we cross your magic river?‘ Ask your child to repeat this to memorise the sentence. You are now the Wizard!

Then they say the sentence to you and you reply saying the sounds in order. For example, ‘only if you give me the…‘ /p/ /e/ /g/. Develop these games further by using word cards instead of objects so your child reads the words.

Make or buy small flashcards with the speech sounds on them. Keep a set in your bag to play while waiting for a sibling, or going to a café. Using the timer on your mobile phone, select the sounds and letters you child has been taught so far. Place them in a pile. Start the timer (set to whatever time you wish – for example, 30 seconds).

Ask your child to turn over the cards one at a time and say the sound clearly. (If they get to the end of the pile before the timer stops, they keep turning over the same cards.) Count how many times they say a sound correctly. Keep a note and next time tell them that you’re going to see if they can beat their record!

Watch this fun animation to find out about phonics and understand the key aspects of learning to read using phonics.

How to blend sounds to read words

Suzy Ditchburn explains how letter sounds can be blended to read words, and gives tips on how to practise phonics with your child.

Top tips for developing phonics skills at home and advice on decoding and blending from Ruth Miskin, phonics expert and creator of Read Write Inc. Phonics. 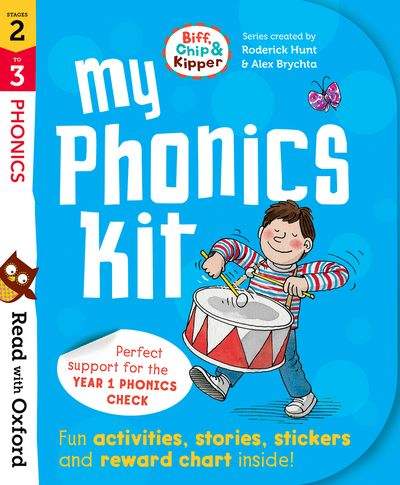 Packed full of fun activities, engaging stories and useful tips, this kit provides you with everything you need to support your child in the lead up to the national phonics screening check for 6-year-olds.

Practise phonics skills with three activity workbooks and three phonics storybooks to share. Reward good work and build confidence with fun stickers and find out everything you need to know about the phonics check with expert advice from phonics advice, Laura Sharp.

Laura Sharp has thirty years' experience in primary education and is passionately committed to ensuring that children experience an enriching and motivating language and literacy provision in the home, school or setting. Before becoming a consultant, Laura was Senior Adviser on the highly acclaimed Communication, Language and Literacy Development Programme.