Unsure of arrays or perplexed by partitioning? Get to know what your child is learning at school with our guide to common terms and phrases used in schools.

For help with general education terms, take a look at the Education glossary.

For help with literacy terms, take a look at the Grammar and literacy glossary.

Mean is a kind of average. To find the mean, add up the quantities then divide by the number of quantities.

Units of measure: An agreed quantity by which we measure things. So, metres, centimetres, litres, millilitres, grams, and kilograms are all units of measure.

Metric measurement systems: Systems for measuring things in which the units of measure go up in 10s or multiples of 10 (100, 1000, and so on).

We now use metric systems for most of our measuring.

Length and distance are measured in kilometres, metres, centimetres and millimetres. There are:

Mass is measured in grams and kilograms. There are:

Volume is sometimes measured in litres and millilitres. There are:

Converting between imperial and metric systems of measure: It can be useful to be able to convert between common Imperial systems of measurement and the comparable metric system (for example, between miles and kilometres). To do this, you need to know the relationships between them. For instance, there are roughly: 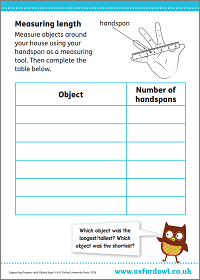 Measure objects around your house using your handspan as a measuring tool.

Weigh objects around your house and record their masses in the table.

Video: What are mass, volume and area?

Get simple definitions of mass, volume, and area and the units used to measure them.

The ability to calculate mentally, i.e. in your head without writing anything down. Learning things such as number bonds, number patterns, doubles, and multiplication tables facts are important mental maths skills.

A calculation where one of the numbers has been taken out. The missing number could be represented by a space, question mark, or shape.

This type of question helps to prepare children for algebra, where unknown numbers are represented by letters.

Drag the numbers into the boxes to complete the calculation. 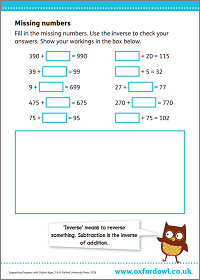 Fill in the missing numbers. Use the inverse to check your answers.

(an improper fraction) can also be represented as 2

A non-unit fraction is a fraction where the numerator is greater than 1.

is a non-unit fraction, because the numerator is 2.

We use numbers to count quantity or to measure. Numbers have a position on a number line. There are many different kinds of number.

A visual image used in almost all classrooms to help children grasp basic number relationships. Children will use a number line to count forwards and backwards, in, for example, 1s, 2s, and 10s, depending on the scale of the number line. 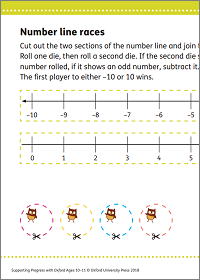 Add and subtract dice to move along number line.

A number square (sometimes called a ‘100 square’) is a visual image used in almost all classrooms to help children grasp the concept of number and place value. 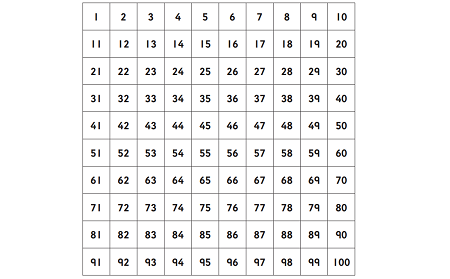 The top number of a fraction is called the numerator. The numerator tells us how many equal parts there are.

Drag the numbers into the boxes to complete the calculation.

Video: What is BODMAS?

Find out the right order to solve any calculation using BODMAS.

A parallelogram is a four-sided shape that has its opposite sides parallel to each other.

Partitioning a number means to split the number into smaller chunks. It is often used to break down numbers when multiplying or dividing larger numbers to make the calculation easier.

The grid method is one popular way of partitioning numbers.

In a pictogram, pictures are used to stand for quantities. A picture can stand for one thing or a number of things. Pictograms can also be called pictographs or picture graphs. In a pie chart, information is shown as a circle. The different-sized sectors or slices of the pie chart stand for the different quantities they represent. For example, the slices of a pie chart can represent the percentage of people who like different fruits. The value of a digit depends on its place within a number. This is its place value and it is the basis of our entire number system.

Drag the numbers into the boxes to make the biggest number you can.

Video: What is place value?

What is place value? Watch our fun animation for a simple definition.

A polygon is any 2D shape with straight sides. Many polygons have special names. For example, triangles, squares, and rectangles are types of polygon. Polygons can be regular or irregular.

A polyhedron is any 3D shape made from polygons. Some polyhedra have special names such as cube, pyramid, or tetrahedron. Polyhedra have faces, edges, and vertices (points).

A pyramid is a solid shape that has a polygon for a base. Each of the sides are triangles meeting at a point. The shape of the base gives the pyramid its name (e.g. a pyramid with a square base is called a square-based pyramid). A radius is any straight line from the centre of a circle to the circumference.

A way of comparing the amounts of different things. For example, if a recipe asks for flour and sugar in a ratio of 2:1, it means that you need 2 lots of flour for every 1 lot of sugar that you put in.

You may also see ratios on map scales. In this case, it tells you the relationship between the distance on the map and the distance in real life. For example, 1:10,000 would mean that 1cm on the map represents an actual distance of 10,000cm (or 100m).

A rectangle is a 2D shape that has four straight sides and four right angles. The opposite sides of a rectangle are equal. A square is a special type of rectangle because all 4 sides are the same length. The word rectangle is usually used to mean the oblong rectangle.

A polygon is rectilinear if it can be divided into rectangles or squares, with all the sides of the polygon meeting at right angles.

A regular polygon is any polygon with all its sides and angles the same size. A square is a regular quadrilateral.

A rhombus has four equal sides. The opposite sides are parallel. It is the correct name for a diamond shape.

A right angle is a quarter of a complete turn. It measures 90°.

A right-angled triangle is a triangle with one 90° angle. A scale is a set of points on a line used for measuring. You can see a scale on maps, thermometers, measuring jugs, or rulers.

A scale factor is the value of the multiplier used to make an enlargement.

A scalene triangle has no sides the same length. All its angles are a different size.

Here are some examples of sequences:

The rule is to add 3 with each step.

The rule is to go up by 3 times the previous number.

This term is used in curriculum documents and refers to work done with shapes, spatial awareness, (for example, volume, and area) and measurements (for example, centimetres, metres, and litres).

A sphere is a perfectly round shape like a ball.

Standard units of measurements are units that are agreed by everyone.Metric units and imperial units are both sets of standard units.

Something is symmetrical if one half is exactly the same as the other half but the opposite way round. If you translate a shape, you slide it to a different position. You do not turn or rotate the shape. This is often done using coordinates on a graph.

A trapezium is a four-sided shape that has one pair of sides that are parallel. The other two sides are not parallel.

Two-dimensional shapes are flat shapes. They have length and width but no thickness. 2D is short for two-dimensional. A word problem that requires two steps in order to be solved is a two-step problem.

In later years, children will encounter multi-step problems – that is, problems involving more than two steps.

Have a go at this two-step problem.

A unit fraction is a fraction which has 1 as its numerator.

is a unit fraction, because the numerator is 1.

A variable is an unknown number in an equation that can take different values, usually shown by a symbol or letter.

A vertex is a point at which two or more lines meet in an object or a shape. A problem written in everyday language that requires maths to find the answer. For example:

Oranges cost 69p a kilo. I pay for a kilo of oranges with a £1 coin. How much change will I get? 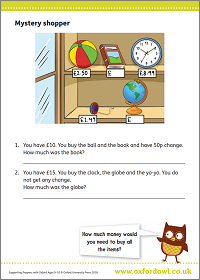 Three word problems based on pictures of items for sale.

The horizontal axis of a graph is called the x-axis.

The vertical axis of a graph is called the y-axis.