In Year 4, your child will continue to develop their spelling. They will write and read more, learning more complex spellings as they go. They will use dictionaries to check words they are unsure of.

Read on to discover the National Curriculum expectations for spelling in Year 4, and to find out how you can support your child at home.

Take a look at the National Curriculum expectations for spelling in Year 4 (age 8–9):

Homophones are words that are spelled differently and have different meanings, but are pronounced in the same, or almost the same, way. They are often confused in children’s writing. In Year 4, your child will learn the difference between:

Spelling words that are often misspelt

The National Curriculum in England provides a word list for Year 3 and Year 4 children of words that are often misspelt. Children will be taught to spell these words at school.

Practise spelling these words with our Spelling word list for Year 3 and Year 4.

Using the possessive apostrophe with regular and irregular plurals

Apostrophes are used to show possession (who or what something belongs to). These are different depending on whether there is one person or thing (singular) or more than one (plural).

When showing singular possession, an apostrophe and an -s are often added (for example, ‘Paul’s bike’ or ‘the girl’s voice’). If an -s is already at the end of a word to show a plural, the apostrophe is added after the -s (for example, ‘the girls’ voices’).

Plural possession: ‘the horses’ field (more than one horse).

When a word ends in an -s, but isn’t a plural (for example, ‘Chris’ and ‘diplodocus’), the apostrophe can be added with or without the -s (‘the diplodocus’ swamp’ or ‘the diplodocus’s swamp’ – both are correct).

Some plural words are irregular, meaning that they do not end in an -s (for example, ‘children’, ‘team’). Here, an apostrophe and an -s are added after the final letter (‘the children’s toys’ or ‘the team’s boots’).

​In Year 4, your child will continue to check the spellings of their words using an age-appropriate dictionary. Find out more about how dictionaries can help your child learn on our Children’s dictionaries page.

There are lots of ways you can help your Year 4 child with spelling. Here are our top ideas.

Online games such as Word worm can be motivating, and so can more traditional games like hangman. Making silly sentences can be great fun too. Challenge your child to write a silly sentence, including as many of the words on their spelling list as possible. 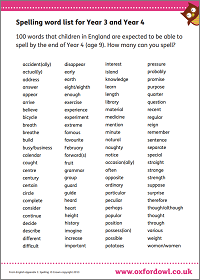 100 words children are expected to be able to spell by the end of Year 4.

This activity book will help your child to progress with their handwriting while having fun. It focuses on developing these key skills, taught in school for Year 4, as part of the Key Stage 2 curriculum. END_OF_DOCUMENT_TOKEN_TO_BE_REPLACED

Bond SATs Skills Spelling and Vocabulary for age 8-9 has been developed with Oxford Dictionaries to begin building core English language skills. With renewed focus on spelling and vocabulary throughout the National Curriculum and in academic testing, this book will help children to build core knowledge of the words expected in key assessments. END_OF_DOCUMENT_TOKEN_TO_BE_REPLACED

The Oxford Primary Grammar, Punctuation, and Spelling Dictionary is the essential reference book. In full colour, it has easy-to-use rules and help, plus an alphabetical list of the tricky, and everyday, words including those most commonly misspelt, all backed by analysis of Oxford's unique database of children's writing. END_OF_DOCUMENT_TOKEN_TO_BE_REPLACED

New edition of the bestselling Oxford Primary Dictionary with more words added, more spelling support, and enhanced supplements for grammar and language help. Easy-to-use with clear entries and examples from the books children love reading, plus curriculum help, it is the ideal dictionary for children aged 8+. END_OF_DOCUMENT_TOKEN_TO_BE_REPLACED