In Year 1, your child will learn to count up to and slightly beyond 100 in multiples of 1, 2, 5, and 10. They will count aloud and will represent numbers using pictures and concrete objects like sticks, straws, and number lines.

Take a look at the National Curriculum expectations for number and place value in Year 1 (ages 5–6):

Count forwards and backwards up to 100

Your child will practise counting forwards and backwards using songs or rhymes. They will count up to 100 and maybe a little beyond it, starting from any number between 0 and 100.

Your child will count in order to find out how many objects are in a group, and to talk about the position of objects (for example, “this one is first, this one is second, this one is third,” and so on).

Use and understand numbers in multiples of two, five, and ten

Your child will start to recognise patterns in numbers. For example, they might notice that multiples of five always end with a 5 or a 0.

Your child will understand place value in numbers in the tens. For example, they will know that in the number 25, the 2 represents 2 tens and the 5 represents 5 ones.

Count more or less from a number

When given a number between 1 and 100, your child should be able to count one up or one down from that number.

Use objects and pictures to represent and identify numbers

Your child should be able to make numbers using objects, such as straws.

31 could be represented by three groups of ten straws and one straw on its own. Your child could then create drawings to represent what they have made physically, such as 31 = ¤ ¤ ¤ \

Your child should also be able to use a number line to count up and down.

Use language like equal to, more than, less than (fewer), most, least

‘There is less water in the glass than in the bottle.’

Your child should also learn to refer to the equals sign (=) as ‘equal to’ rather than ‘the same as.’

They will also be able to read and write the words for the numbers 1 to 20: one, two, three, and so on.

1. Talk about numbers around us

Talking about how numbers are used in the real world can help your child understand why they are important. For example, you could talk about numbers when you are buying something, or telling the time, or catching a particular bus.

Video: What is number?

Get a simple definition of the concept of number and the difference between cardinal, ordinal and nominal numbers with this fun animation.

Your child needs to know why, how, and when to count.

You could practise counting orally through songs and rhymes like ‘Ten Green Bottles’, going forwards and backwards. Have a go with our fun song: 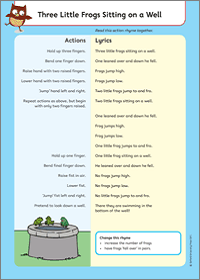 Sing this fun action rhyme with your child.

Counting objects around the house is also a good way to make sure your child understands that each number name can represent an amount. Try counting in steps. For example, you could count pairs of socks in twos, use your fingers to count in fives, or count 10p coins in tens.

It is important that your child understands what numbers look like, so it is helpful to represent numbers using objects and pictures.

Your child also needs to understand that numbers can be made up of other numbers. So three can be made of three ones, or a two and a one. Once they reach the teen numbers, we need to show that these are numbers made from one ten, plus several ones. For example, fifteen is made of one ten and five ones. Again, this is much easier to explain to your child using objects or pictures.

This activity book will help to develop your child’s core mathematics skills, whilst ensuring they have fun! They will quickly learn to solve calculations involving addition and subtraction with one and two-digit numbers up to 20. Includes stickers and a progress chart. END_OF_DOCUMENT_TOKEN_TO_BE_REPLACED

This fun activity book will encourage your child to progress with number skills, such as multiplication, division and fractions. They will quickly learn to recognise and find a half and a quarter of an object or amount. They will also learn to solve problems using multiplication and division skills. END_OF_DOCUMENT_TOKEN_TO_BE_REPLACED

This activity book will encourage your child’s learning in numbers and counting. With the help of clues and handy tips, children will quickly learn to count, read and write numbers up to 100 and spell number words up to 20. They will also be introduced to counting in multiples of twos, fives and tens. END_OF_DOCUMENT_TOKEN_TO_BE_REPLACED

This activity book will help build your child’s understanding of shapes and measures. Each of our Progress with Oxford workbooks is focused on the skills your child will need at each stage of the school curriculum and is precisely matched to your child’s age ensuring they are aligned with school expectations. END_OF_DOCUMENT_TOKEN_TO_BE_REPLACED