In Year 6, your child will read, write, and compare numbers up to 10,000,000. They will be able to round any whole number to a required degree of accuracy and solve complex problems using place value.

Take a look at the National Curriculum expectations for number and place value in Year 6 (ages 10–11):

Note that your child will use the word ones and not units when talking about place value.

Round any whole number to a required degree of accuracy

Use negative numbers in context

Your child will solve problems involving:

Their knowledge of place value will be very useful for this. They will use physical objects, drawings, diagrams, and mathematical symbols to visualise problems.

In Year 6, your child should be able to use the whole number system, including saying, reading, and writing numbers accurately.

Talk about large numbers in the real world, such as house prices, electricity meters, or football transfers. When you see big numbers like these, see if your child can read the number out loud. 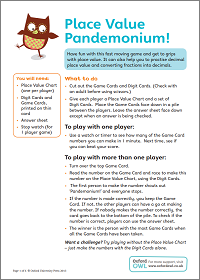 Have fun with this fast-moving game and help your child get to grips with place value.

If your child would like an extra challenge, you could set a timer! How many pairs can they order correctly in 30 seconds? Now can they put all of the numbers in order? Ask them to explain how they ordered the numbers.

4. Make estimates
Being able to make accurate estimates is a valuable skill we use in everyday life. When calculating, encourage your child to use their rounding skills to estimate the answer before calculating precisely. This will help them to check if their answer seems reasonable.

If you are out shopping and you have picked up a few items, ask your child to estimate the total cost of the items. They will need to round the cost of each item to find the estimated total. For example, if you bought items costing £3·82, 82p, £4·10, and £2·45, your child could round each of these items to the nearest pound:

Your child could then add the rounded amounts of £4, £1, £4, and £2 to find the estimated total of £11. When they calculate precisely and come to £11.19, they can feel fairly confident that their calculation was correct.

This workbook has been developed by Bond to develop the number-related mathematical skills and knowledge required by the National Curriculum for SATs success. END_OF_DOCUMENT_TOKEN_TO_BE_REPLACED

This book has been developed by Bond to develop the measurement, geometry and statistics skills and knowledge required by the National Curriculum for SATs success. END_OF_DOCUMENT_TOKEN_TO_BE_REPLACED

These Bond Times Tables Flashcards provide rapid recall practice in all the times tables from 1 to 12, helping children to meet the curriculum expectations for Key Stage 2 maths and the Year 4 multiplication tables check. With questions on one side and the sum on the reverse, the flashcards can be used independently or with a parent, tutor or another child to quickly test knowledge. END_OF_DOCUMENT_TOKEN_TO_BE_REPLACED

This puzzle book has been created to develop children's ability with numbers through problem-solving. The book is packed with number-based puzzles that are broken into Warm-up, Intermediate and Tricky levels, so that children can take on the challenge they feel best suits them. END_OF_DOCUMENT_TOKEN_TO_BE_REPLACED