In Year 4, your child will start using negative numbers and will learn how to round numbers. They will also use numbers well into the 1000s, and will start reading and writing Roman numerals.

Take a look at the National Curriculum expectations for number and place value in Year 4 (ages 8–9):

Your child will count forwards and backwards from 0 in multiples of 6, 7, 9, 25, and 1000, on top of all the multiples they have learned in previous years.

Find 1000 more or less than a given number

Your child will be introduced to negative numbers. They will be expected to include negative numbers as they count forwards and backwards. For example, counting back in 2s:

Your child will learn that the position of the digit in a number tells us the value of the digit, up to numbers with four-digits.

Your child will be expected to know how many thousands, hundreds, tens, and ones there are in any four-digit number. For example:

Note that children will use the word ones and not units when talking about place value.

Order and compare numbers beyond 1000

Children will use words like more, less, fewer, more than, less than, equal to, equivalent, and the same value as when comparing numbers. They will use the more than (>), less than (<), and equals (=) symbols correctly.

Your child will use numerals, words, objects, drawings, diagrams, pictures, and symbols to represent numbers. This includes using number lines and number squares.

Your child will be expected to solve problems involving:

Their knowledge of place value will be very useful for this. They will use physical objects, drawings, diagrams, and mathematical symbols to visualise problems.

Place value charts can be a great way to help your child represent numbers. These charts will help your child to read, write, and compare numbers, as well as to understand zero as a placeholder. For example, in the number 6203, your child will be able to see that we write the 0 to represent that there are no tens.

However, if we compare the numbers 7565 and 7654, they both have the same number of thousands. Therefore, we now need to look at the hundreds digit:

Why not try again with a timer? How many pairs can they order correctly in 30 seconds?

By the end of Year 4, your child should be able to recall all multiplication facts up to 12 × 12. Your child will be tested on their times tables in the Year 4 multiplication tables check.

You can help your child to practise their multiplication facts by playing pairs. Write out 12 multiplication questions (for example, 8 × 5) on small cards or pieces of paper. Then write out the corresponding multiplication answers (in this case, 40) on more cards.

Lay them all out on the floor or table at random, face down. Ask your child to turn any two cards over. Are they a matching question and answer? If they are, your child should keep them. If not, they should turn them back over. Take it in turns and keep going until all the pairs have been found. 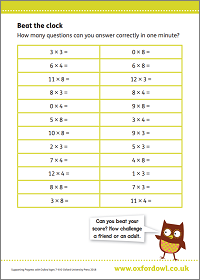 Beat the clock! How many questions can you answer in one minute?

Video: What are multiples?

Find out all about multiples.

4. Use temperature to explore negative numbers

To help build your child’s familiarity with negative numbers, look for them in the real world. Vertical number lines like those seen on thermometers can help your child grasp the concept of negative numbers. In winter, your child could keep a weather diary and record the daily temperatures. They could then create a graph or chart to show the changes in temperature. Then you could then ask all sorts of questions about their data. For example:

‘What was the difference in temperature between Monday and Wednesday?’

‘Did the temperature ever drop below 0°C?’

If it’s not a cold winter and the temperatures don’t drop below zero, your child could research countries around the world (including some cold ones!) and record their weather. Talk about the differences in temperatures together.

Point out Roman numerals in the modern world, like at the end of some TV programmes or in the introductions of some books. Help your child to understand that our number system has changed over time and that it now includes the concepts of zero and place value. You could investigate with your child why we changed from the Roman numeral system to our current Arabic number system.

Have a Roman numeral challenge. Can your child write the Roman numerals for key numbers, such as the number of the day they were born on, or their age? If your child has already started learning Roman numerals and you don’t know them, maybe they can help teach you!

This activity book will help your child to progress with these core maths skills while having fun. This will help them become confident with using numbers and data handling. END_OF_DOCUMENT_TOKEN_TO_BE_REPLACED

This activity book will help your child to progress with these core maths skills while having fun. They will become confident with quickly solving calculations involving addition, subtraction, multiplication, and division. END_OF_DOCUMENT_TOKEN_TO_BE_REPLACED

This activity book will help your child to progress with all Year 4 maths skills while having fun! The books in our Progress with Oxford series are focused on the skills your child will need at each stage of the school curriculum. END_OF_DOCUMENT_TOKEN_TO_BE_REPLACED

This puzzle book has been created to develop children's ability with numbers through problem-solving. The book is packed with number-based puzzles that are broken into Warm-up, Intermediate and Tricky levels, so that children can take on the challenge they feel best suits them. END_OF_DOCUMENT_TOKEN_TO_BE_REPLACED