Take a look at the National Curriculum expectations for number and place value in Year 2 (ages 6–7):

Your child will count in steps of 2, 3, and 5 starting from 0. They will use objects, songs, and number lines to practise counting in steps. They should be able to count up and down.

Your child will understand that the position of the digit in a number tells us the value of the digit.

Your child will also understand using zero as a placeholder. For example, when writing the number seventy, we write this as 70, where 0 is used to show that there are no ones in the number.

Your child will be expected to use objects, drawings/diagrams/pictures, number lines and 100 squares, and symbols to represent numbers. They will make these representations themselves, and will also be able to understand them when someone else has made them.

Your child will also start to estimate numbers based on different representations. For example, they will be able to say, ‘each of those piles of sticks has about 10 sticks, so we have about 30 sticks.’

Compare and order numbers from 0 to 100

Your child will learn to put a selection of numbers between 0 and 100 in order:

‘There is less water in the glass than in the bottle.’

They will also be able to use the more than (>), less than (<) and equals (=) symbols to compare numbers.

Read and write numbers up to at least 100

Writing out the numbers 10–20 can be particularly tricky for children, so your child might need a bit more focus on these numbers to start with.

Use place value and number facts to solve problems

Your child will use place value to solve problems. For example:

‘If I have 6 apples and you have 4 apples, how many apples do we have altogether?’

To solve this problem, your child needs to understand that zero can be used as a placeholder in numbers like 10, where the ‘1’ means that there is one ten, and the ‘0’ means there are no ones.

Your child will learn number facts, which are simple number ideas that they will memorise and know straight away, such as ‘I know that 5 and 5 make 10’. This will make mental maths easier.

Showing numbers in interesting ways really helps your child to understand number and place value. Objects from around the home like buttons, dried pasta shapes, marbles, or pencils are great to practise counting and organising numbers. For example, ’32’ could be represented by 32 marbles arranged into three groups of ten and two ones.

As well as objects, your child can use drawings, diagrams, or symbols to represent numbers. For example, you could draw 23 stick figures, then draw a circle around each group of ten, with three left outside of the circles. This shows that 23 is made from two tens and three ones.

Try drawing alongside your child, and remember, wacky drawings are more likely to capture their imagination!

Video: What is number?

Get a simple definition of the concept of number and the difference between cardinal, ordinal and nominal numbers with this fun animation.

Your child will be expected to write numbers up to 100 using numerals and words. You could support their learning by playing a matching game.

Alternatively, you could place all the cards face down, and turn over the cards two at a time. If your child turns over two that match, they keep the cards. If they don’t match, they turn the cards back over again. This is a great memory exercise as well as a way to get to know numerals and number words.

Match the numerals to the number words.

Encourage you child to talk through how they know that one number is bigger or smaller than another:

Now, try again with a timer! How many pairs can your child order correctly in 30 seconds?

Drag the symbols to complete the number statements.

When your child is counting objects, ask them to estimate how many there are before they count them. Being able to make accurate estimates within mathematics is a valuable skill we use in everyday life. It will help them to tell if their answers to maths problems are reasonable or not.

When counting more than ten objects in a set, it is an important skill for your child to be able to group objects in groups of ten. For example, if they are counting 36 buttons, encourage them to begin by counting out buttons into groups of ten. They will then have 3 groups of ten buttons and 6 buttons on their own.

It’s also helpful to practise counting in 2s, 3s, 5s, and 10s. Use objects around the house such as pairs of gloves, 2p, 5p, and 10p coins, or small bunches of grapes. Encourage your child to talk about the patterns they notice when counting in different steps (for example, the fact that numbers end in 0 or 5 when counting in steps of five). 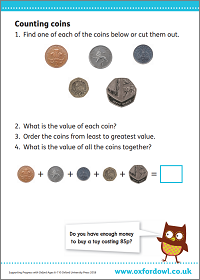 This will help your child to see patterns in numbers as they develop their calculation skills.

To help reinforce your child’s understanding of number, try to find everyday opportunities for them to use known number facts to solve problems.

This is a really easy thing to do at home and in the shops. For example:

‘If we buy 7 apples and 3 bananas – how many pieces of fruit do we have altogether?’

‘If we have 10 people coming to your party and we have 5 party bags, how many more do we need to buy?’

This activity book helps to develop your child’s key maths skills. As they work through these colourful and exciting activities, your child will become more confident using numbers. This book is precisely matched to your child’s age and aligned with school expectations. END_OF_DOCUMENT_TOKEN_TO_BE_REPLACED

This activity book will help to develop your child’s core maths skills. Solving calculations involving addition and subtraction can be fun! The books in our Progress with Oxford series are focused on the skills your child will need at each stage of the school curriculum. END_OF_DOCUMENT_TOKEN_TO_BE_REPLACED

This activity book will encourage your child to progress with number skills, such as multiplication, division and fractions, while having fun. The books in our Progress with Oxford series are focused on the skills your child will need at each stage of the school curriculum. Includes stickers and a progress chart. END_OF_DOCUMENT_TOKEN_TO_BE_REPLACED

This activity book will help develop your child’s understanding of shapes and measures. Lively characters, colourful activities and picture clues help your child have fun while they learn the skills they need at school. END_OF_DOCUMENT_TOKEN_TO_BE_REPLACED